This Sunday Business Post (December 14 2014) included the announcement that the Government is set to change the rules for self builders regarding S.I. No.9: 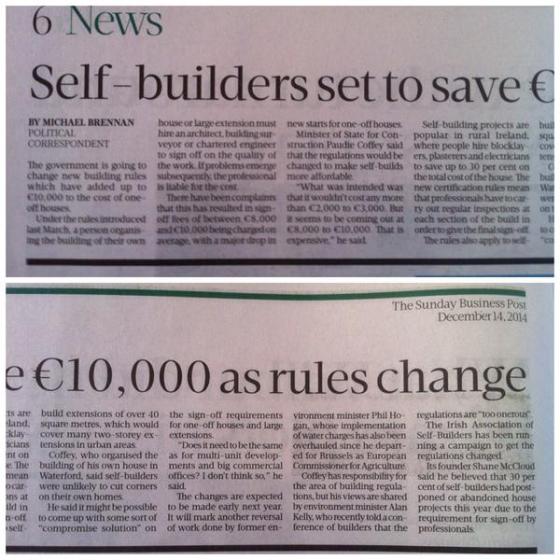 The crux of the piece was covered in THIS BREGS POST where key points in the newspaper piece are extracted below:

• The [Building Regulations] are “too onerous”

I’ve already set out may table on a 10 step plan for Irish Building Control and it’s great that the Government is listening to the country (on this subject at least) and it shows what the organised lobbying from the Irish Association of Self-Builders (founded by Shane McCloud) can accomplish.

But what is my opinion?

• The Government should be careful not to simply give a ‘knee jerk’ reaction and simply exempt Self-builders from S.I 9, the response needs to be well formed and thought through and not just a vote garnering exercise.

• I’ll stand by by 10 Point Plan; I still think the best way forward is to scrap S.I.9 – by keeping it and having another piece of legislation (exempting self-builders) in much the same way as S.I 105 was intended to exempt ‘public and privately owned buildings classified as first, second or third level places of education, hospitals or primary care centres’; eventually you’ll have everything exempt and we’re back to my proposal of simply scrapping and starting again

• By exempting self-builders from the legislation you’re back at the beginning again on poor build quality without third party, independent inspections. My 10 Point Plan covers this.

• The newspaper article rather misses the point in that in my opinion; it is not the fees that are the problem (self-builders could easily spend similar amounts as those quoted on kitchens or appliances) but it is the ‘right’ to self-building in Ireland that goes back generation after generation that was swiftly removed when S.I.9 came into play (when the completion certificate was required to be signed by ‘owner or principal of Building Company’)

I am one of the candidates standing for RIAI Council (Western Region) in the forthcoming elections, CLICK HERE for my message to Western Region colleagues and I was asked recently:

Fundamentally I am a team player – I’ll work within Council as a representative of my Western Colleagues in order that each of their opinions is heard and to give the Western Region (in what is a very Dublin-centric Institute) a strong yet unifying voice. I am already an Assigned Certifier and I am currently working within the system. So in answer, I won’t be “holding out” for my view and I’ll be working within the current system which includes the RIAI Council as well as Building Control legislation in order to improve the situation for professionals and consumers. I have set out what I believe is the best way forward and I believe this is a good starting point for negotiation.