A bold statement but when I’m in a particularly good mood, I know it’s true. This is why:

In your work, say you have a set of tenets that you have been taught to work to; now say that you get the chance to implement these beliefs into your work. Not always, but sometimes the architect gets the chance to do such a thing. There needs to be a set of circumstances that all need to fall in place for this to happen; from the architect that obviously needs to have a few ideas to start with (ahem) to an exceptional client to a builder that will deliver.

So what design principles give me the most satisfaction seeing implemented? Here is by no means an exhaustive list, some of which may apply to your project (and equally some may not):

This is old but this is new

We’re building in the 21st century, our buildings should reflect this. When you have a traditional building there’s no reason why an extension should be the same or a pastiche of what went before.

When you make this distinction between old and new, let’s make it definite. Separate old from new and make the junction between the two clear and distinct:

A gap between old and new (Work in progress)

Rooms should be the right sizes

Rooms should be the right size for their purpose; sounds straightforward but sometimes it’s tempting to make a room a certain size to make the build easier or to add additional rooms to ‘fill in space’. Say no to this temptation.

You need to know when things should be symmetrical and when not:

Asymmetrical haircut (thanks Rihanna and http://www.zimbio.com )

In much the same way that ‘White Space’ is underutilised in graphic and web design, we can also use the same concept in architectural design. CLICK HERE for the Wikipedia page on the concept of ‘White Space’.

Work in progress with some ‘White Space’

Why place windows for just the sake of placing windows? Each element should have a specific and definite reason for ‘being’, which leads neatly onto…

An often quoted phrase of modern architectural design (for the Wikipedia page CLICK HERE) but I expand on that a bit by having the functions defined as the views, the passage of the sun, the prevailing wind. The building should take each of these aspects (and many others) into account when being designed. As discussed above a window is there to take in a view or to increase solar gain and not just for the sake of it – Form Follows Function in every respect.

Inevitably in every architects work, it will be influenced by the past. Some of it will be relevant and some (most) will not. The most important consideration is to understand what you’re doing, not to simply pastiche and make reference where you think appropriate: 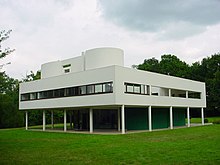 This is the key to successful Irish architecture; strong, simple forms that are of a scale comparable to indigenous shapes. As the Mayo Design Guide for Rural Houses says: “High quality ‘contemporary’ …design is encouraged…and good design will result from * Simplicity of form”:

And to those clients and contractors that make this possible, I thank you. I think I’m going to return again to this topic at a later date. If you have a project and some of this is of interest to you then give me a SHOUT: